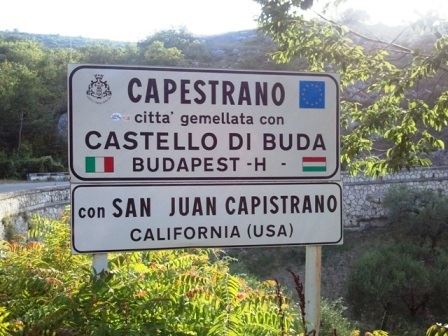 Capestrano, Italy is a small Italian village of 956 inhabitants. The village is located in the heart of the Abruzzi region in the natural park known as the "Gran Sasso e Monti della Laga National Park". In 1934, Capestrano became world-famous when a poor farmer, while tilling his vineyard, found the world-famous statue of an Italic Warrior of Capestrano. The statue, which probably was a funeral monument of Italic king Nevius Pompuledeius (fourth century BC), is currently kept in the National Archeological Museum in Chieti. The originality and beauty of the statue have made it the symbol of Abruzzi for the next millennium. Capestrano is also known for being the birthplace of one of the greatest Franciscan Saints, Saint John of Capestrano (1386 to 1456). Saint John is known in Spanish as San Juan de Capistrano, and the Franciscan missionaries who founded Mission San Juan Capistrano named it in his honor.

When visiting Capestrano, there are several sights that are worth a visit. One is the Parish church in the market square, which has a baroque interior, a fine marble acquasantiera (holy water font), and a wooden pulpit. The majestic Piccolomini Castle was built in the 13th century. The castle is headquarters for the Mayor and City Council, and also the site of many of Capestrano's annual festivals.

The Monastery of St. Francis is located on a hill covered by olive trees facing the fortified village, erected by St John of Capestrano, which is now the site of a museum a historic library with a beautiful frescoed cloister, and warm-hearted Franciscan Fathers still guarding the precious relics of the Saint. The House where John of Capestrano was born is nestled in the heart of the historic center of the town.

The Benedictine Abbey of St. Peter ad Oratorium is situated on the bank of Tirino river, about 3 miles away from Capestrano. The church was built in 752 AD as part of the monastery of St Vincenzo al Volturno, by the Lombard king Desiderius.