San Juan Capistrano is unique in Orange County and a rarity in California, a community whose foundation was laid by the earliest people to inhabit the land, and a community still evolving after more than 220 years. California history, and therefore San Juan Capistrano history, is often divided into five major eras: Prehistory, the Spanish era, the Mexican/Rancho Era, Statehood, and the Twentieth Century.

Before the arrival of Europeans in Orange County, the Indians of the area were largely peaceful hunter-gatherers. Tribes had a monarchic form of government, with leadership passing within one family, and a council of men who aided that leader. War was never waged for conquest, but to avenge crimes against family members or leaders. A deity called Chinigchinich was worshiped in religious ceremonies held in a small temple structure located in the center of each community.

Spanish missionaries divided Orange County Indians into two groups based on their proximity to area missions: Juanenos (originally Acagchemem) and Gabrielinos. It is thought there were in reality many small tribes, all belonging to the Shoshone family, sharing common linguistic roots.

Abundant evidence of prehistoric Indian life has been found within San Juan Capistrano and several local families trace their lineage to the Juaneno band. 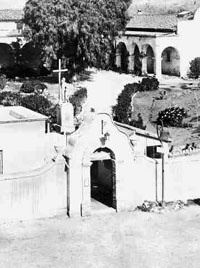 Two factors were essential to Franciscan Missionaries in placing the California missions: first, a site with ample fresh water and arable land, and second, a native population of prospective converts to do the work of the church and eventually become Spanish citizens. The Capistrano Valley offered both, and so on November 1, 1776, Mission San Juan Capistrano became the seventh mission in the California chain, beginning the Spanish Era in San Juan.

The success of the San Juan Mission is revealed in records of 1796 that count nearly one thousand Indian neophytes living in or near the Mission compound and working the various farming, herding, candle- and soap-making, iron smelting, and weaving and tanning operations. Also, 1,649 baptisms were recorded that year.

An increasing population led to the building of numerous adobe homes for the native and intermarried families with ties to the Mission (some Spanish soldiers assigned to the Mission married native women). In 1807, 34 adobes were built or remodeled. Records from 1811 reveal a prosperous year, with the Mission producing many tons of wheat, barley, corn and beans, and thousands of head of cattle, sheep and horses.

The Mexican independence of 1821 brought a new era to San Juan Capistrano. A Secularization Act was passed in 1833 to divest Mission lands. Instead of going to Indians as envisioned, land grants more often went to political appointees. These land grants began the Rancho system of large ranches owned by a few powerful men and families.

The Secularization Act began an immediate decline of the Mission in San Juan Capistrano and an overall decline in the town's population. In 1841, the Mexican government declared San Juan to be a pueblo (town), instead of a religious parish. In 1845, the Mission itself was sold to John Forster, an Englishman who had married the governor's sister and who eventually would own nearly 250,000 acres across three counties.

The American victory over Mexico in 1848 resulted in the acquisition of the territory of California and statehood two years later, which resulted in major changes for San Juan Capistrano. The town initially became plagued by squatters, drifters and bandits, as it was one of the few stopping and resupply points between San Diego and Los Angeles. The ranchos also brought cowboys into town on Saturday nights who caused drunken brawls in the streets. Bandits and stagecoach robbers were plentiful and it was said that until the 1920s, San Juan had "one good murder a year."

San Juan's location on the road to newly discovered goldfields in northern California led to rapid growth with homes, stores and a hotel being built. A number of board and batten homes were built next to Mission era adobes in the Los Rios area. Part of the Miguel Yorba adobe on Camino Capistrano became an overnight stage stop. Cattle raised on nearby ranchos were driven north and sold at great profit to feed prospectors.

Drought, smallpox and a state property tax led to the decline of the ranchos and began the sale of land to settlers interested in farming. The Homestead Act and inviting travel guides caused an increase in the number of easterners interested in pursuing the California dream.

By the 1880s, barley, walnuts and oranges had been planted within the town limits. The California Central Railroad came to San Juan in 1887, bringing access to markets and creating a land boom.

Twentieth Century (1901 to the Present) 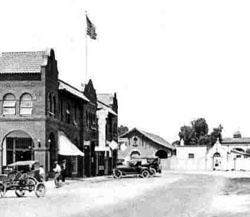 The years after 1900 were a period of stability for San Juan. The early years saw the community become a tight-knit group of farm families and merchants, relatively untouched by the explosion of development to the north and south. The Capistrano Valley, instead, developed into an agricultural center with an orange processing and produce packing plant near the railroad.

During this early period, the Mission languished. Despite an early stabilization effort by the Landmark Club, it wasn't until 1910, when Father John O'Sullivan came to town, that the Mission was restored to a semblance of its earlier self. San Juan then became a destination for those interested in a glimpse of early California life, and visitors included Hollywood stars and tourists from around the world. In 1939 a live NBC radio broadcast spread the fame and legend of the swallows' return to a nationwide audience.

Intense development pressures in the early 1970s caused the citizens to create a new General Plan, which preserved historic resources and open space, limited development density, and provided for ridgeline preservation. These measures, adopted in 1974, have proved to be years ahead of many California communities, and have helped assure the perpetuation of San Juan Capistrano's unique heritage. 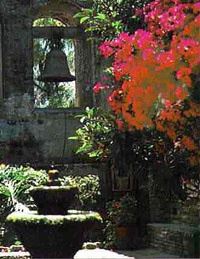 Mission San Juan Capistrano has been the home to many people over 230 years of history. Its history consists of memories and stories of its past inhabitants and present visitors. It is a place of historical, cultural, and religious significance, as well as a place of inspiration and education.

Mission San Juan Capistrano became the seventh of twenty-one missions to be founded in Alta California. Like the previous six missions, San Juan Capistrano was established to expand the territorial boundaries of Spain and to spread Christianity to the Native peoples of California. Unlike the British colonies on the East Coast of North America, which brought people from their homeland to form colonies, the Spanish believed they could transform the Native peoples into good Spanish citizens. The idea was to make colonial outposts called missions, led by Franciscan padres and Spanish soldiers. The missions would be a center of learning and training of Native peoples. The Spanish government and Catholic Church wanted to convert the people to Christianity and train them in a Spanish or European lifestyle so that the Native peoples would eventually live in towns and pay taxes, like good Spanish citizens.

In reality, the Spanish padres and soldiers had a huge task ahead of them. Moving into the frontier, making a community from scratch, and trying to communicate with and convert the Native Americans was not an easy task.

Native Americans first came to the Mission because they were curious about the Spanish forms of technology, new animals, new food, and ideas. As the Native peoples interacted with the Spanish, they soon realized the padres wanted them to convert to Christianity and join the Mission.

Whether they fully understood it or not, if the Native man or woman decided to be baptized and join the Mission community, it became a symbol or contract that showed their commitment and forever bonded them to the mission. Not only did the baptized individual receive a new Christian name, they also agreed to new rules and lifestyle changes. One condition of joining the Mission was that the converts could no longer leave the grounds without permission. The padres taught the Native American converts the Spanish language, a new set of craft skills, the religion Christianity, and European and Christian social customs.

After 1812, the Mission began to decline. Many factors were involved in the Mission's decline, including the earthquake in December of 1812, which caused the Great Stone Church to collapse; the decline in birth rate; the increasing mortality rate of the population due to disease; and the inability of the Spanish government to adequately protect and supply the Missions with needed goods.

By 1821, Mexico won its independence from Spain, which made Alta California a territory of Mexico. Under new governmental direction, the Mission faced continued decline. By 1834, the Mexican government decided to end the mission system entirely. Soon after the decree of secularization, or the ending of the missions, the landholdings of Mission San Juan Capistrano were divided and sold to 20 prominent California families. By 1845, Governor Pio Pico even sold the Mission itself. The Mission was sold at auction to John Forster, Governor Pio Pico's brother-in-law, for $710, when it was valued to be worth more than $54,000. For the next 20 years, the Mission was a private ranch property of the Forster family.

Only a few years after acquiring the territory of California, the United States declared it a state in 1850. Many California dioceses and parishioners petitioned the government to have mission buildings and lands returned to the church. People were saddened at the state of the missions. Some mission buildings had been turned into stores, bars, inns, or even stables. Most were falling apart and not maintained.

President Abraham Lincoln responded to the petitioners by giving back the missions to the Catholic Church. By the 1870s and early 1900s, artists, photographers, and visionaries took interest in the abandoned missions. Many wealthy individuals formed groups to campaign for restoration. The Landmarks Club, led by Charles Lummis and resident padre Father John O'Sullivan, was Mission San Juan Capistrano's greatest proponent of preservation. Throughout the 1910s to 1940s, a great amount of preservation work ensued.

The Mission continues efforts in preservation, with the help of donations each year. Although the Mission is owned by the Catholic Church, it is run by a non-profit organization. This means Mission San Juan Capistrano does not receive any funding from the Catholic Church, State, or Federal Government for operation or preservation. It depends entirely on the generous contributions of visitors and benefactors. With the help of the public, the Mission can continue to be an inspirational historic, cultural, and religious site.